One of the new trends among the health food hippie crowd is drinking Kombucha Tea. I tried Kombucha about a year ago and I have become somewhat obsessed with it. I have no idea why, because it smells and tastes like something you would never voluntarily drink.  Kind of like highly carbonated spoiled beer with a shot of vinegar, but for some reason I find myself craving it.  Kombucha has been around for more than 2,000 years and it was worshiped as a remedy for immortality.  The ancient Chinese called it the Immortal Health Elixir.  According to lore, the tea was introduced to Japan by a Korean physician named Dr. Kombu who gave the bacteria-laden liquid to a Japanese emperor as a healing tonic.  Kombucha is available commercially at health food stores or can be made at home.  It is started by using a solid culture of yeast and bacteria, often referred to as the mother, mushroom, fungus or scoby. 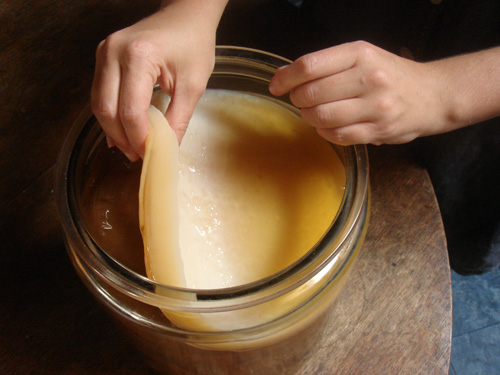 The Kombucha culture looks like a white rubbery pancake.  The culture is placed in black or green tea with sugar and is allowed to ferment.  The culture floats above the tea and sugar mixture, and through the natural process of fermentation converts the sugar into organic acids and carbon dioxide.  At the same time it produces a variety of other compounds that are detoxifying and nutritious to the human body, including  Epigallocatechin gallate (EGCG), glucuronic, lactic, gluconic and folic acids.  The mixture is also high in B-vitamins as well as an assortment of probiotics (beneficial bacteria including lactobacillus acidophilus and s.Boulardii).  The fermentation process of Kombucha leaves it virtually sugar-free and naturally low in carbohydrates.

Some of the alleged health benefits of drinking Kombucha:

There have also been reports of adverse effects such as infections, high levels of lactic acid and allergic reactions in Kombucha Tea drinkers.  Kombucha Tea is often brewed in homes under non-sterile conditions, making contamination likely.  If ceramic pots are used for brewing, lead poisoning might be a concern; the acids in the tea may leach lead from the ceramic glaze.  Some medical literature reports adverse reactions including nausea, vomiting and headaches among those who drink more than four ounces of Kombucha Tea daily.  Experts recommend drinking it in moderation.  It also contains trace amounts of alcohol.  Since the potential health risks of Kombucha Tea are unknown, anyone with an immune deficiency or any other medical condition should consult a physician before drinking the tea. Women who are pregnant or breast-feeding should not use this tea.

I only drink Kombucha made by reputable brewers, therefore I am not overly concerned about health risks or contamination.  I usually get  GT’s Kombucha or  High Country Kombucha available in a variety of flavors.  The flavor comes from adding various organic fruit purees and ginger. I don’t know if there are any true health benefits from drinking Kombucha, but I do feel an increase in energy and an overall sense of well-being after drinking it, and for some reason my body craves it.

Whether it’s a cure-all tonic or toxic elixir, I will continue to drink my Kombucha.

I would love to hear about your experience (if any) in drinking Kombucha Tea.

May you always have…
The sun to warm you,
The moon to charm you,
And a guardian  angel, so nothing can harm you.